[Disclosure: As of the time of this writing, I am not directly affiliated with nor have been sponsored or hired by the creators of the Citymapper app or any other companies or organizations whose services I mention in this article – everything you read from me regarding these companies is my objective advice. Any advice in this blog does not constitute legal or medical advice and is provided as is with no liability to #FrugalCongressLife or the author.]

For this new series on #FrugalCongressLife, I will be profiling resources that are anywhere from handy to potentially game-changing in navigating the particulars of dance congresses both local and out of state in the most frugal manner possible. The first such resource I will be covering is Citymapper, a free app for iPhone and Android designed from the ground up to help users navigate walking, bicycling, and public transportation in the city in which they are currently traveling.

At congresses where transporting yourself extensively is required, your most practical and frugal mode of transportation will be walking and mass transit. You can certainly use UBER or Lyft to get around, but UBER and Lyft are relatively expensive and the costs add up quickly. Your most practical #FrugalCongressLife option would be to figure out that city’s mass transit and use it to get around.

Waze or Google Maps will more than do the job of getting you around by car, but are oddly lacking at the task of helping you figure out walking, bicycling, and mass transit and using those options to get around. Enter Citymapper.

Billed as “the ultimate transport app” by its creators, Citymapper is a sleek, colorful, and intuitive smartphone app designed from the ground up to help its users successfully navigate every form of non-solo driving transit imaginable, including walking, bus, bicycle, subway, rail, light rail, Uber/Lyft, other rideshare services, and even ferry and scooter transit.

Only certain cities are available on Citymapper and the way it works is you select the city you want to navigate in the app, and you get instant access to a massive wealth of real-time data for your selected city including not only walking directions and routes for bus/rail/light rail/subway, but also departure times including delays, wait times, bikeshare and scooter availability, real-time charge data for scooters and Car2Go rideshares, and even bicycle routes.

The cities available on Citymapper at the time of this writing at the end of August 2018 are:

A very impressive list already, and I would love to see more cities added. Pittsburgh, Richmond, and San Diego are three missing cities that come to mind readily for me.

Navigation using the app couldn’t be easier, you input your starting point and destination into the app and when you want to leave or arrive and you get options for walking, bicycling, Uber, Lyft, or suggested combinations of walking and public transportation (rail/bus), as well as projected travel time and cost of each option and even calories burned for walking and bicycling.

Pictured: Citymapper options for the trip from Ferocity Dance Company‘s studio in Falls Church, VA, to the Renaissance Hotel in downtown Washington, DC, the site of DCBX and Tropical New Year’s Eve

Select an option and hit the go button and Citymapper takes you through each step of the journey, with separate screens for each leg of the journey involving a different mode of transport.

For example, your first screen will likely be a walk with turn by turn directions. Your next screen after that may be a guide to the subway train you’re getting on showing wait times, alerts, and even the best section of the train to sit in, with a separate screen after that showing what how many stations you will be riding through, what station to get on at and what station to get off at. Your next screen after that may be a similar screen for the bus showing wait times, alerts, fares, and the exact street corner to wait at, as well as a subsequent screen showing exactly how many stops to take and what stop to get off at. Your final screen will invariably be a turn-by-turn detail of the walk from your bus stop or subway stop to your destination. 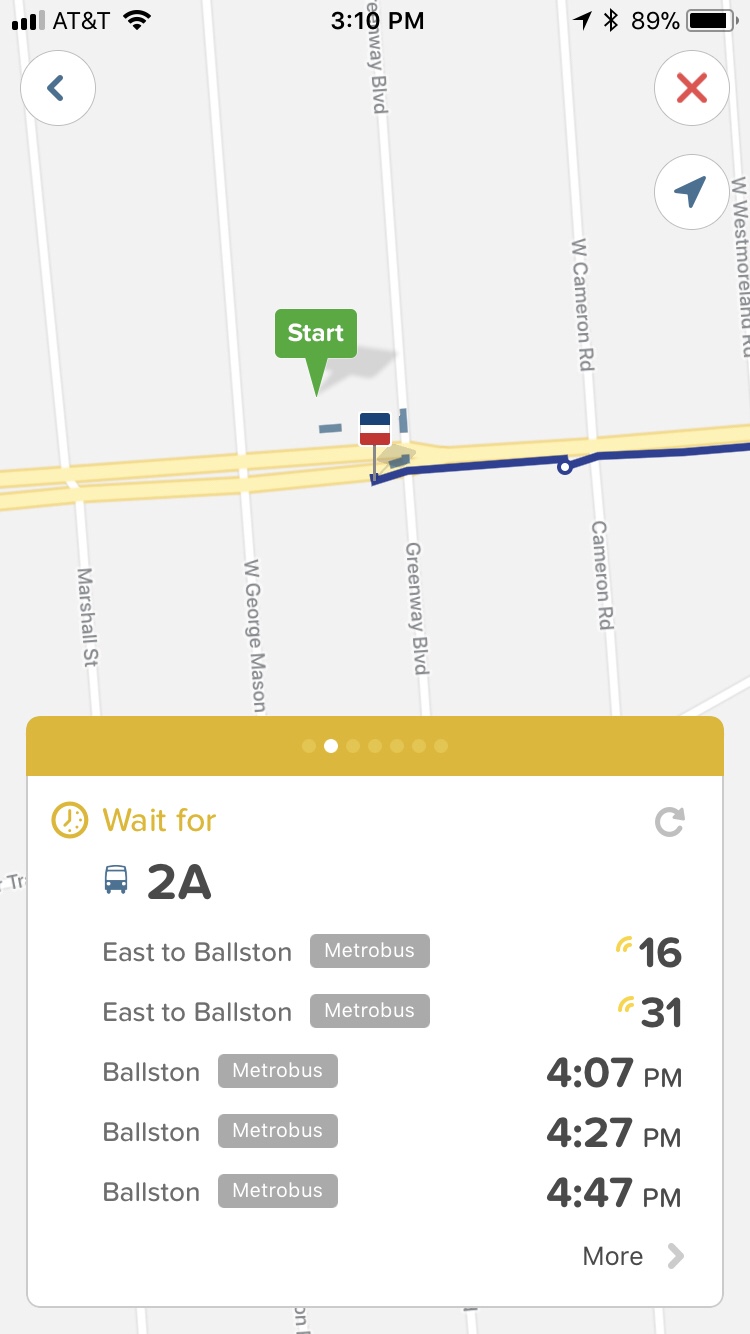 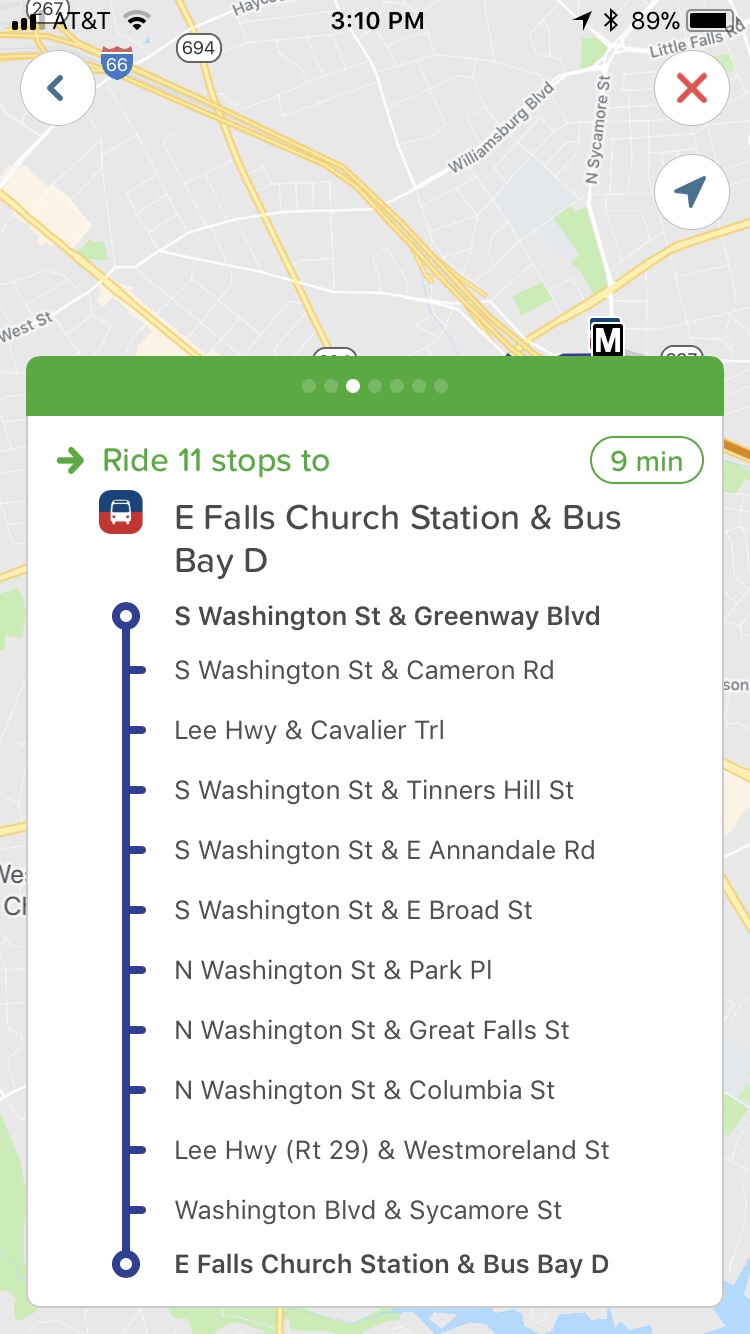 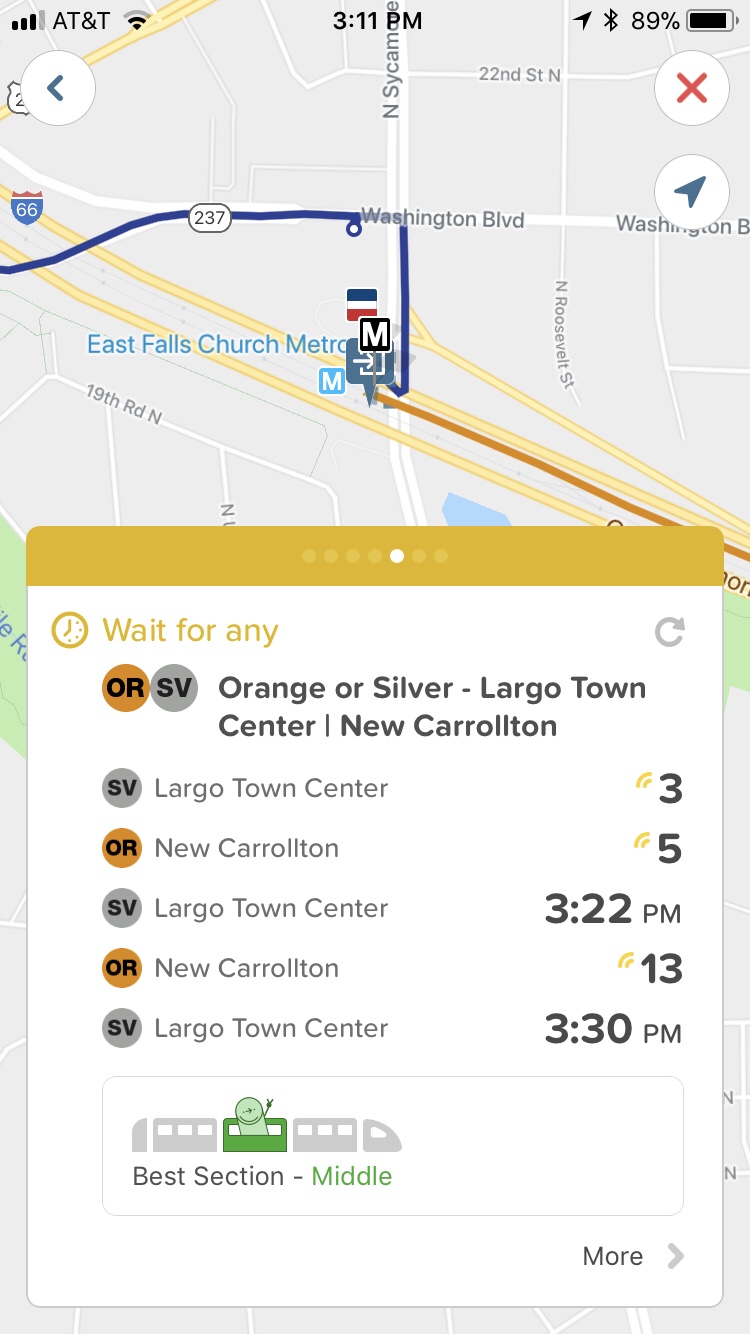 Pictured: step-by-step Citymapper directions for shortest route on the aforementioned trip from Ferocity to the Renaissance

What you see depends on how complex your trip is and how many different forms of transportation you are using, but it is all very intuitive and easy to use and makes the formerly stressful and involved task of navigating a city’s public transportation system into an almost effortless poetically smooth experience.

Additionally, you can save routes offline in advance and use it without needing to go online if the Internet gets spotty on your actual trip.

I have been using Citymapper extensively lately since moving back to the DC proper to navigate DC’s metro system, particularly the bus system, which I was less familiar with than Metro’s subway system, and Citymapper has been doing an excellent job in that area.

I also used Citymapper to navigate the New York City Subway system, with which I have extensive previous experience, when I was there for the New York Loves Bachata Weekender at the end of July this year.  My routes there were a mix of walking and subway, and my only complaint with Citymapper in NYC was that it did not specify whether the subway trains I was supposed to get on were Uptown or Downtown trains.  Luckily I knew the NYC subway system well enough so that I did not get lost in NY like Kevin McCallister off of that detail, but distinction between uptown and downtown trains is a necessary addition to Citymapper’s NYC package in my opinion.  Otherwise Citymapper did an excellent job in NYC as well.

[UPDATE: Since this section was written, Citymapper has added distinction between uptown and downtown subway trains to their New York City package in a recent software update.]

As an additional bonus, Citymapper is very good with bicycle routes. I do not bicycle anymore, but as a test and out of my own curiosity I switched to the bicycle route features (using the “personal bike” option rather than the “bikeshare” option, an important distinction especially if you are in an area with no bikeshares available) and punched in the start and end addresses from a few of my favorite bicycle rides from my days as a bicycle commuter in College Park, MD.  Each time, the app gave me three possible options, a “quiet” option (bicycle paths and low-speed/low-traffic roads only), a “regular” option (mix of bicycle paths, low-speed/low-traffic roads, and a small amount of high-speed/high-traffic roads), and a “fast” option (as many high-speed/high-traffic roads as possible).  I found each route presented by Citymapper to be very accurate to my own personal experience with these routes.  Citymapper does bicycling very well too!

In conclusion, Citymapper is a very handy and almost essential addition to any frugal traveler’s tool belt, both for dance congresses and life outside of dance congresses. I look forward to more cities being added and to using it to navigate my way around more in the future.